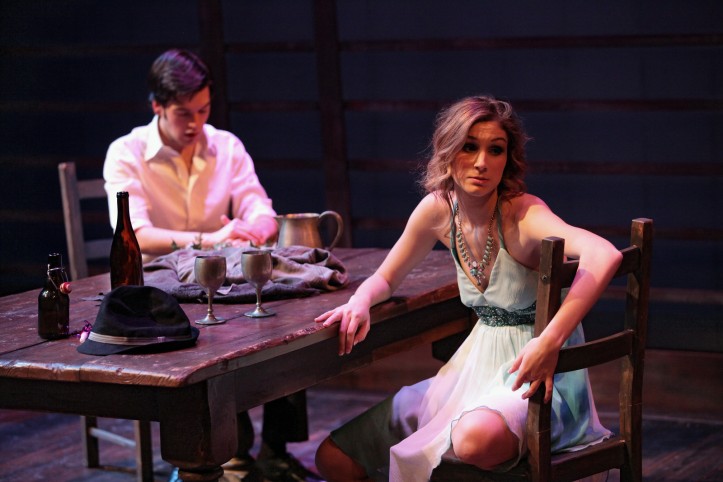 MISS JULIE is one of those plays studied in theatre programs for its innovation, social relevance, and reputation despite it being written in 1888.  And after seeing it at Xavier University last night, I can see the brilliance in the script.  There’s depth, nuance, and themes that are as relevant today as they were when it was first written.  It’s timeless, really.

Director Regina Pugh has treated it as such.  Setting it in no particular place or time, this story of the relationship between a servant and his master’s daughter focuses on the characters and the great dilemma of love and class.

Griff Bludworth plays the servant, “Jean.”  Alex Roberts is Miss Julie.  Rounding out the featured cast is Sara Ringebach as “Kristin,” another servant.  Kristin is a much more appropriate love interest for Jean; he hedges his bets by having a relationship with both.

Watching this production, I was reminded how difficult it can be for young actors to fully grasp the language or the mature themes presented in a challenging piece like this.  Bludworth, the most experienced actor on stage, seems to have a good handle on it.  Ringenbach made good use of her minimal stage time to convey her character’s emotions sometimes without even using words.  And Roberts certainly brings out the instability of Miss Julie’s emotional dysfunction.

Contrasted with the performance of BETRAYAL the previous night, this production is less subtle, more broad.  From the raucous scene featuring the servants and their bawdy, profane mocking of Miss Julie to the manic, crazy interpretation Roberts gives the title character, the choices made here are bold.  I would like to see this same production with the same cast but five years from now.  Sometimes material this challenging requires  some maturity and experience.

One has to admire the effort, though, that Pugh and cast and crew has put into taking this rarely performed piece and bringing it to life in the modern era.  I think its clear the play can still speak to us today and overall this production gives us pause and things to mull over.