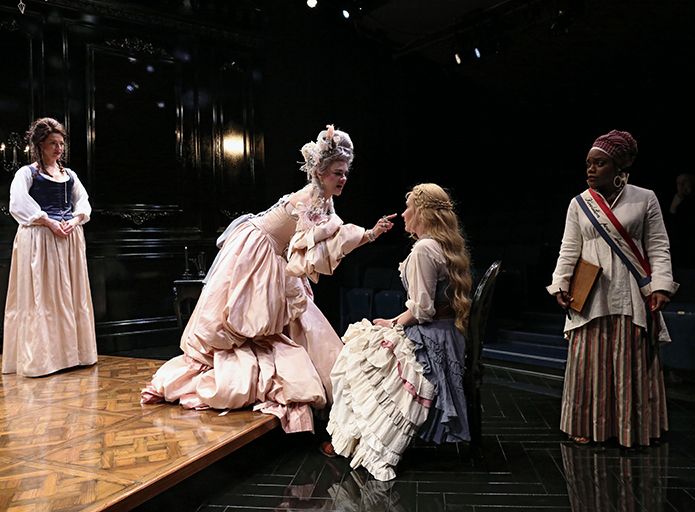 I am not sure that THE REVOLUTIONISTS is a play that I would have gone to see had it not been my “job” as The Sappy Critic.  The big dresses, the antique wigs, the French Revolution – all major turn offs.  But boy, oh boy, would I have missed out!

This hilarious new comedy not only teaches some history, it also may inspire people to take a stand . . . and write about it, too.

THE REVOLUTIONISTS is the story of fictionalized account of Olympe de Gouges and her quest to write a profound play about the women in the era of the French Revolution including Charlotte Corday, Marianne Angelle, and Marie Antoinette.  I know, it sounds awful.

But it’s really funny!  The playwright, Lauren Gunderson, has chosen to set this tale in the time period but the characters speak in modern, Americanized English.  The hilarity begins right out of the gate, with self-referential, ironic, and sarcastic humor between the four leads.  Things are clicking along at a good pace. . .and then Marie Antoinette shows up.

I can’t remember a comedic performance that I’ve enjoyed as much as this one.  Jessica Lynn Carroll is a comedic tour de force from her entrance to her exit.  She energizes the piece and gives it a life that it wouldn’t have without her.

It’s a good script; maybe a little wordy and perhaps a tad bit preachy.  But its inventive, inspiring, and well thought out.  It’s the performances, though, that make it all work.

The rest of the cast holds their own under the direction of Eleanor Holdridge.  Lise Bruneau does fine work as the playwright, de Gouges.  She’s neurotic, like all good playwrights, and passionate, too.  The actress conveys the depth of her character well.  Kenita Miller brings sass, confidence, and humanity to the role of anti-slavery activist Angelle.  And Keira Kelley is interesting, wicked, and brash as the young assassin Corday.  I loved Marion Williams costume and set design and the lighting by Mark Barton keeps us in tune with the sometimes meta-experience of the script.  Scott Killian’s sound design and original compositions support the action and the actors at the level we’ve come to expect at the Playhouse.

I’m not sure this play is for everyone.  But theatre lovers, actors, playwrights, and those interested in the time period will have an absolute ball.  And they will likely be surprised while they do so.  I know I was.

THE REVOLUTIONISTS continues its World Premiere run at the Playhouse in the Park through March 6th in the Thompson Shelterhouse.  Click here for more information.