Things just keep rolling along in the world of theatre here in Cincinnati.  I saw VANYA, SONIA, MASHA, AND SPIKE and a concert version of HAIR in Dayton, TRANSMIGRATION at CCM, and PETER AND THE STARCATCHER last week.  This week is busy, too, so let’s get to it!

BREAKING NEWS:  The Broadway Cincinnati series has been announced for this next season and the shows are:  MOTOWN THE MUSICAL, PIPPIN, WHITE CHRISTMAS, KINKY BOOTS, IF/THEN, NEWSIES, and CABARET.  I vote yes.  More information on how you can subscribe can be found here.

First up is SERIALS 2: THUNDERDOME tonight at Know Theatre of Cincinnati. The line up for tonight will feature the return of CINDERBLOCK, ANDY’S HOUSE OF _____, and SO IN TENTS. Also tonight, we’ll see the  debut of A ROLLING STONE GATHERS NO LOSS by Alexx Rouse and Robby Macke and Kevin Crowley’s SO THIS COUPLE… These are all fifteen minute episodes (and I hope they all stick to fifteen this time around) and at the end of the night the audience will vote for which three stay – as well as which two previous episodes return in the next installment.  It is always interesting and a fun party atmosphere. I’ll see you there.  I recommend showing up by 7 to get the best seats. Tickets are available in advance by clicking here.  They’ve had packed houses for most of the run of this season so don’t delay in getting yours now.

On Wednesday night, I’ll head back to one of my favorite theaters in town to see the regional premiere of DETROIT ’67 at Ensemble Theater of Cincinnati.  Here’s a description:

When their parents die, Chelle and Lank inherit their childhood home. To make ends meet, the siblings host “basement parties,” spinning the newest records to come out of Motown, a risky business as police crack down on after-hours joints in black neighborhoods. But when a mysterious white woman finds her way into their care and a string of raids increases police brutality around the city, they find themselves much more divided than over just the family business. 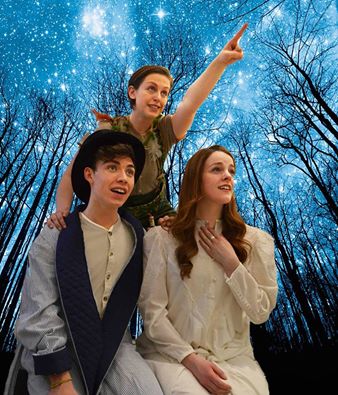 Finally, this week will see the opening of PETER PAN at Wright State University. The highlight of this show will surely be the performance of Bruce Cromer as Captain Hook, but Wright State’s productions – especially their MainStage musicals – are some of the best around.  Alyson Snyder plays Pan. Tickets will sell fast – it will likely be sold out before they open so get your tickets now if you want to see this magical journey to Neverland. Click here for more information. As always, check out Rob Bucher’s BEHIND THE CURTAIN CINCINNATI for all the shows in the area.  His resource is truly invaluable to me and the theatre community at large. Coming up soon are some other major shows like RACE with New Edgecliff, the CCM Senior Showcases in both Drama and Musical Theatre, COVER OF LIFE at Falcon Theater, and HEARTS LIKE FISTS as Know Theatre of Cincinnati.  So many things to see; so little time! Stay tuned for more next Monday.  In the meantime… see you at the theatre!