Happy December!  We are in the final push of the “2014” of the 2014-2015 season. I’m a busy boy this week and I couldn’t be more excited!  Last weekend I saw both A CHRISTMAS CAROL and BUREAU OF MISSING PERSONS and then this week I’ve got a ton of shows on my schedule.  Let’s dig in.

One of my favorite contemporary Christmas movies is “Elf;” I’m thrilled to attend Opening Night of the musical version at the Aronoff on Tuesday. From their tour company’s website:  “ELF is the hilarious tale of Buddy, a young orphan child who mistakenly crawls into Santa’s bag of gifts and is transported back to the North Pole.  Unaware that he is actually human, Buddy’s enormous size and poor toy-making abilities cause him to face the truth. With Santa’s permission, Buddy embarks on a journey to New York City to find his birth father, discover his true identity, and help New York remember the true meaning of Christmas. This modern-day Christmas classic is sure to make everyone embrace their inner ELF.” The show only runs for one week so get your tickets now.

For our Dayton readers, also opening on Tuesday is Dare 2 Defy Productions’ rendition of NUNSENSE.  Click here for more information on where to see it (its being performed in multiple venues.

On Wednesday, Ensemble Theatre’s family friendly, home-grown tradition of using non-holiday themed musicals continues with a remounting of SLEEPING BEAUTY.  This production is directed by artistic chief D. Lynn Meyers (assisted by CCM Senior Dallas Padoven) and is choreographed by the very busy Dee Anne Bryll.  “Romance, comedy, action, rock n’ roll, and opera—this magical, musical version of Sleeping Beautyhas it all! Meet Briar Rose, her overprotective parents, three wacky fairies (and a wicked one), and a dragon with an attitude as our contemporary twist on the classic tale returns to Ensemble’s stage. From the creators of Cinderella and Snow White, this enchanted and memorable musical will delight audiences of all ages this holiday season.”  I’ll be there on opening night and plan to grab a bite at OTR Eagle prior to the 7 pm start.  Tickets and more information is available here.  ETC is having a sale, too, on Cyber Monday, so you ought to check that out.  Oh, and here’s a tip . . . bring $2 in cash for the parking garage across the street and save; otherwise it’ll cost you $5.

Thursday night is of course the live broadcast of PETER PAN on NBC, but I’ll be at CCM watching this year’s CAROLS FOR A CAUSE.  From the FaceBook event: “Every year, CCM musical theatre and drama majors collaborate to present a holiday revue featuring singing, dancing, and, of course, holiday treats!  All proceeds from this year’s show will benefit DWAVE (Deaf World Against Violence Everywhere). This non-profit organization focuses on providing advocacy and support services to deaf victims of domestic and sexual violence. It is the only organization of its’ kind in the state of Ohio.” I’ve been told that this year’s show will be less “cabaret” and more “musical theatre.” I don’t care what the format it; its at CCM and I’m never disappointed.  You should come join me in support of this good cause at 7:30 PM in DVAC 300 on the UC campus.  There’s a minimum donation of $5 required. 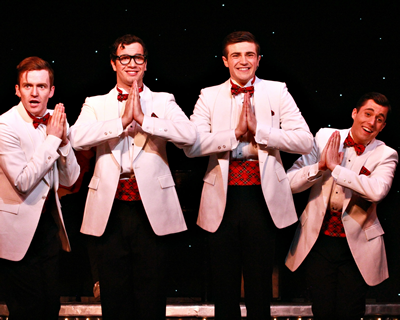 Speaking of CCM, FOREVER PLAID: PLAID TIDINGS opens at the Covedale Center for the Performing Arts also on Thursday night. This cast features four of CCM’s finest students (Charlie Meredith, Thomas Knapp, John Battagliese, and Tyler Huckstep) in the sequel to their successful run on the Showboat Majestic awhile back.  “FOREVER PLAID: PLAID TIDINGS offers the best of FOREVER PLAID tied-up in a nifty package with a big Christmas bow on top! Filled with Christmas standards that have all been “Plaid-erized,” our boys are back to do their Christmas Special.  At first Francis, Jinx, Smudge, and Sparky aren’t sure why they’ve returned to Earth for another posthumous performance, but a phone call from the heavenly Rosemary Clooney lets them know that they’re needed to put a little harmony into a discordant world. Sprinkled among the Christmas offerings are audience favorites like their riotous three-minute and eleven second version of “The Ed Sullivan Show” – this time featuring the Rockettes, the Chipmunks and The Vienna Boys Choir, and a Plaid Caribbean Christmas which puts the “Day-O” in Excelsis!  This truly “heaven-sent” holiday treat will lift audiences’ spirits and remind youngsters that not all good music has to be auto-tuned.  The show is directed and choreographed by CCM faculty member’s Steve Goers Patti James respectively. Tickets and more information can be found here.

Also opening on Thursday is Xavier University’s BLACK FLY SPRING.  Last year, Xavier produced a brand new play called FROM WHITE PLAINS that was one of the best things I saw all year.  I am excited to see this new work, directed by local actress Regina Pugh, as Xavier’s new theatre program is really doing some good work.  The playwright, Nick Gandiello, will be conducting talkbacks after shows on December 4-6th.

Here’s a brief synopsis: “A year after her sister is killed while working as a war photographer, a young woman is set to present the photographs at a memorial. When she and her fiancé retreat to a lakeside mountain town to reflect and prepare, they find themselves at odds over their secrets, desires and their place in the world. A new play from a daring young playwright, BLACK FLY SPRING explores how we move forward during times of despair.”  I’m very intrigued and will be there on Sunday night.  Ticket information can be found here.

This year’s Children’s Theatre of Cincinnati holiday production is THE SNOW QUEEN.  This show was written by Steve Goers (see above re: FOREVER PLAID) and his Chicago playwriting partner, Alyn Cardarelli.  “Embrace the season with this chilling show, based on the original frozen fairy tale by Hans Christian Anderson.  In this wintry tale, a prince and princess find themselves torn apart by an ill-advised wish that the Snow Queen must grant during the Winter Solstice.  Come see Prince Kai, Princess Gerda and her comrades as they enter a world of the unknown to reunite with each other once again.”  Tickets and more information can be found here.

This next one is definitely NOT for children, as Tara Williams directs Falcon’s first half of their holiday double-header (its the “naughty” in “naughty and nice.”)  THE EIGHT: REINDEER MONOLOGUES opens on Friday night.  “Eight reindeer dishing about the real Santa. You’ve heard about the rumors about him and what he does in the toy shop. You’ve seen Vixen on late night talk shows, and heard about Rudolph’s big secret. Yes, the reindeer finally speak up and believe us: they do not hold back! Eight: The Reindeer Monologues is an adult romp up to the North Pole (and down Santa’s… well, you get the idea).”  I’m not sure I’m completely ready for this black comedy but I’m going to check it out regardless.  Tickets and more information can be found right here.

“Regional premiere of Joan Didion’s stage play based on her popular memoir, this play tells the story of the year of her life following the sudden death of her husband of forty years, writer John Dunne, and the subsequent hospitalization and grave illness of their only daughter, Quintana Roo.”

This one-woman show opens on Friday and runs through December 28th at the College Hill Town Hall.  Tickets are $20 and are available here. They are offering a Two for One special on opening weekend using the code “Magical Weekend” at CincyTicket.com.

And finally, on Sunday afternoon I’ll be attending a fundraiser at the historic Peterson Estate in Indian Hill featuring some CCM talent, including musical theatre students Ben Biggers, Lawson Young, and DJ Plunkett as well as professor Vince DeGeorge and vocal instructor Kimberly Daniel. Ms. Daniel is one of that I hear rave reviews about from her students.  This concert is part of the MUSIC FOR ALL SEASONS series that raises money for CCM charities and I’m happy to go and show my support and get the word out about this program.  Look for a special report coming next week about this one.  Click here for more information.

So there you go… so many shows opening this weekend within 100 miles of each other.  There are more, too, and you can find out about all of them by going to Rob Bucher’s comprehensive theatre site, Behind the Curtain Cincinnati.  His site is such a valuable resource to our community.

So, this is a tremendous kickoff to the last month of the year and the holiday season.  Have you considered theatre tickets as a gift for someone in your life who may not get out to the theatre much?  All of our local professional theatres would love to sell you something, I’m sure, and who knows . . . your gift might ignite someone’s love of theatre.  It could be the gift that keeps on giving!

Happy Holiday season and I’ll see you at the theatre!