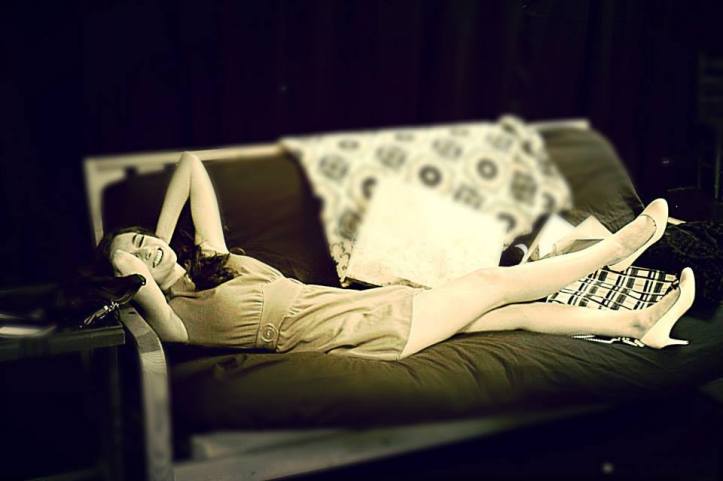 One of the most enjoyable things about writing this blog is the chance to encounter new things – new works, new theaters, new playwrights, and more. So, when I saw that Clifton Performance Theatre was playing host to a brand new play called WYATT’S BED, written by teenager Isaiah Reaves, I couldn’t wait to go and show my support.

Reaves, the very first Tin Man at Clifton Performance Theater (which plays host to a large theatre education program as well as two different professional theatre companies), is almost all grown up now.  I say almost because he’s not even legally an adult.  However, he writes like one. This play is very mature and full of surprises.

Wyatt (named after old-timey actress Jane Wyatt) is a young naive prostitute, who is in love with a doctor, Doug, who also has a fiancee.  His best friend, a photographer, seduces her and she falls in love with him . . . but can’t shake her feelings for Doug.  Too bad Doug really doesn’t want to be with her, though he does reluctantly continue to fill her prescription of “happy pills.”  Meanwhile, Doug’s son, Vincent, can’t stand the fiancee (Iris) and together he and family friend, Blair (who also loves Doug, though he won’t give her the time of day) kvetch and scheme bringing the farce to this more-often-than-not dark drama.  There’s also a very dangerous pimp involved.  Needless to say, there’s a lot going on here but Reaves manages to make it all come together in a thrilling conclusion. I liked it very much.

Oh, it’s not perfect.  Not many plays are.  And I don’t think its too fair to give him a pass and say “well, he’s just a kid.”  He writes like an adult and I’m reviewing him as such.  I would have shortened a few of the scenes.  I would have either upped the comedy or brought the darkness down a notch (though some of this also falls on the director, David Faller) as I wasn’t sure if I was supposed to be watching a farce or a film-noir tribute or both.  That’s not inherently bad, but I did find myself leaning in to the action only to become frustrated at the pace at which things happened more than once.  But perhaps that was intentional too. . . after all, irritation is a feeling, too, and I like to be moved.

While I’m on the negatives, nearly all of the characters seemed just a little too dumb, which again led to my irritation, however in a pure farce this would work better.  If it were me, I’d lighten up the script (Reaves writes comedy very well; some of the lines were laugh out loud funny) and go full bore in that vein.  But I’ve got at least two plays that aren’t finished and this young man has apparently written four!  I’m jealous.

The acting ranged from very good to average but again each of the actors were either just out of high school (one or two might still be heading into their senior year) or in college with the exception of Jared Earland (“Porter”) who spent all year as an intern at Ensemble Theatre Company.  He was very good and seemed the most grounded of all the actors.  However, I  liked the work of Evan Verilli as “Vincent” (though there were times when he was a bit over the top, especially when conveying anger) and Lauren Everett as “Iris.”  As one audience member said during the talkback, “Iris is scary.”  She was; and in the best way possible.  I thought Molly Hennsey as “Blair” was especially mature as and Zach Lower managed to make “Doug,” who should be a thoroughly unlikeable character given his actions and made him a little sympathetic despite his womanizing ways.  He almost made me believe all these women would want to be with him – and not just for his money.  Josh Beasley turned in a fine performance as the “Rudolph,” the pimp, as well.

All in all, I was pleasantly surprised at the depth of the piece and the maturity of the dialogue.  Faller, the director, took a good script, and made things flow well in the intimate space that is the CPT.  I could easily see this show being staged elsewhere, with a more age appropriate cast, and knocking the socks off of some folks.  Reaves definitely has a career ahead of him if he wants it.

No matter what, I am confident that Artistic Director Carol Brammer is proud to see one of her first students shine so brightly. This is the future of Cincinnati theatre . . . and the future is very, very bright.

WYATT’S BED runs through Sunday afternoon at Clifton Performance Theatre on Ludlow Avenue in Cincinnati, Ohio.  Tickets and more information can be found on the FaceBook event here.